All the bits come together… 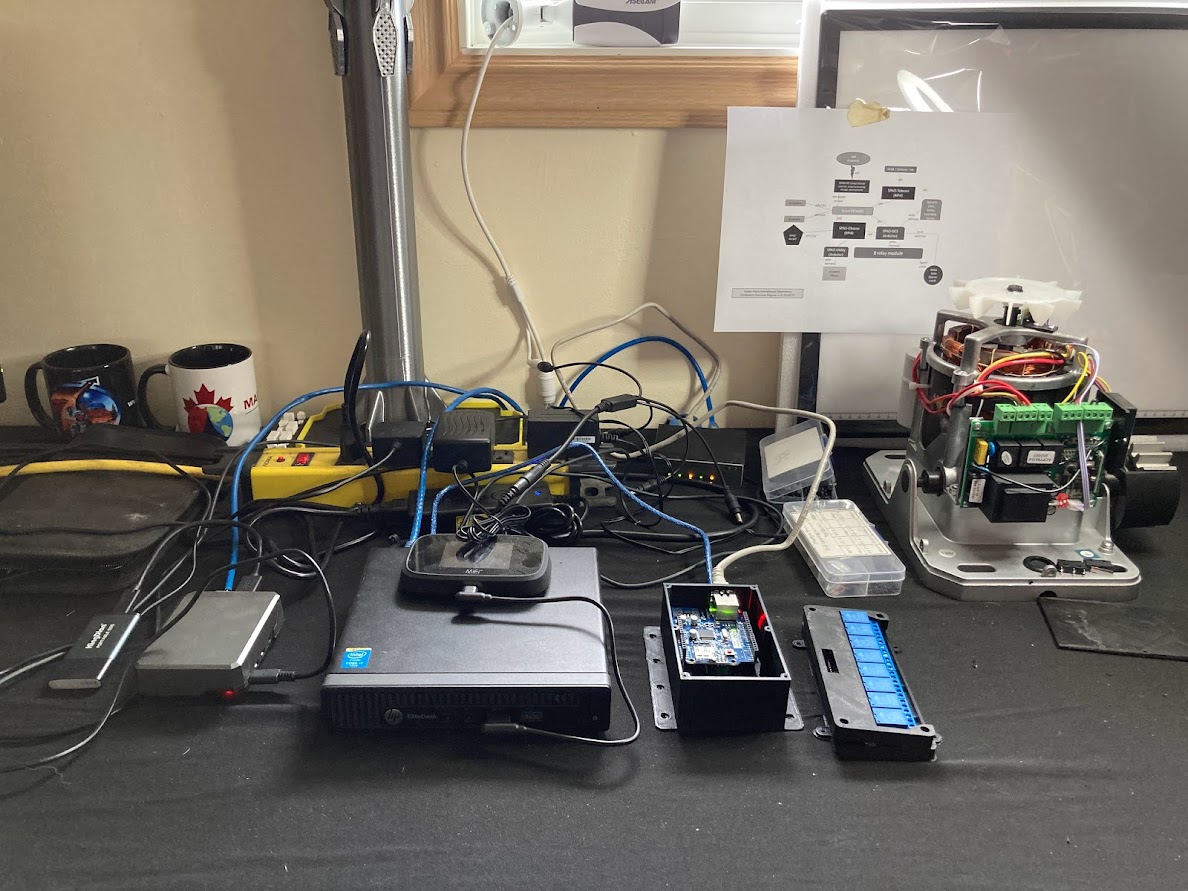 I think I have everything I need to complete this project – I received an Aleko AR1550 sliding gate opener on Friday which was the last bit, although for some reason the second package containing the gear racks has not been delivered yet – based on the FedEx tracking site the package is sitting in Memphis awaiting international release. I still have lots to do before needing the racks so no big deal.

In the image is my workbench with the HP Linux server that will be the main platform for image processing and workflow tasks, the observatory controller RPi that will run all of the observatory hardware including the Arduino Mega2650 running the OCS software, an 8 relay module (both with 3d printed cases) that will talk to the Aleko as well as switch things off and on as needed, a 1GB switch for networking everything together, and (at top) one of the IP cameras I’ll be using to see whats going on in the observatory. The electroluminescent panel is in the background, it runs on 12v as well and will be hooked to an Arduino Uno that will turn it on when the telescope is taking flats. On top of the computer is the Mifi that won’t be used initially but will be used as Internet connectivity once I move it out to a dark site. The telescope controller RPi4 along with the USB3 hub that a lot of the scope hardware connects to is actually velcroed to the NEQ6 mount so I’ll have to run a network cable and 12v to the pier to control and power that. Next step is to cut a piece of plywood the right size and mount everything on it, then run the wires.

The power bar is temporary, one of my more immediate tasks is figuring out how to power things without needing 120v for anything but the opener and computer.  Although initially, I will just use mains to power the observatory once I have everything else working I have 2 33 amp/h power banks that I plan on using, one for the telescope and one for the observatory and misc. The Aleko and computer will connect to AC plugs on the power banks which have built-in inverters. The OCS can provide voltage monitoring for two power buses so I can keep an eye on them. I have one 40W solar panel that I used to charge the power banks in the field but I suspect I’ll need to go for a couple of 100W panels on the roof to keep the banks charged, one per bank. You can connect additional batteries to the power banks so I’ll see how they do.

Below is a component diagram for the observatory control system.

UPDATE: Good news, hooked power up to the gate opener and live to tell the tale. 🙂 It even works! Quite a bit beefier than I expected for the low end opener, so it will have no problem with my roof!