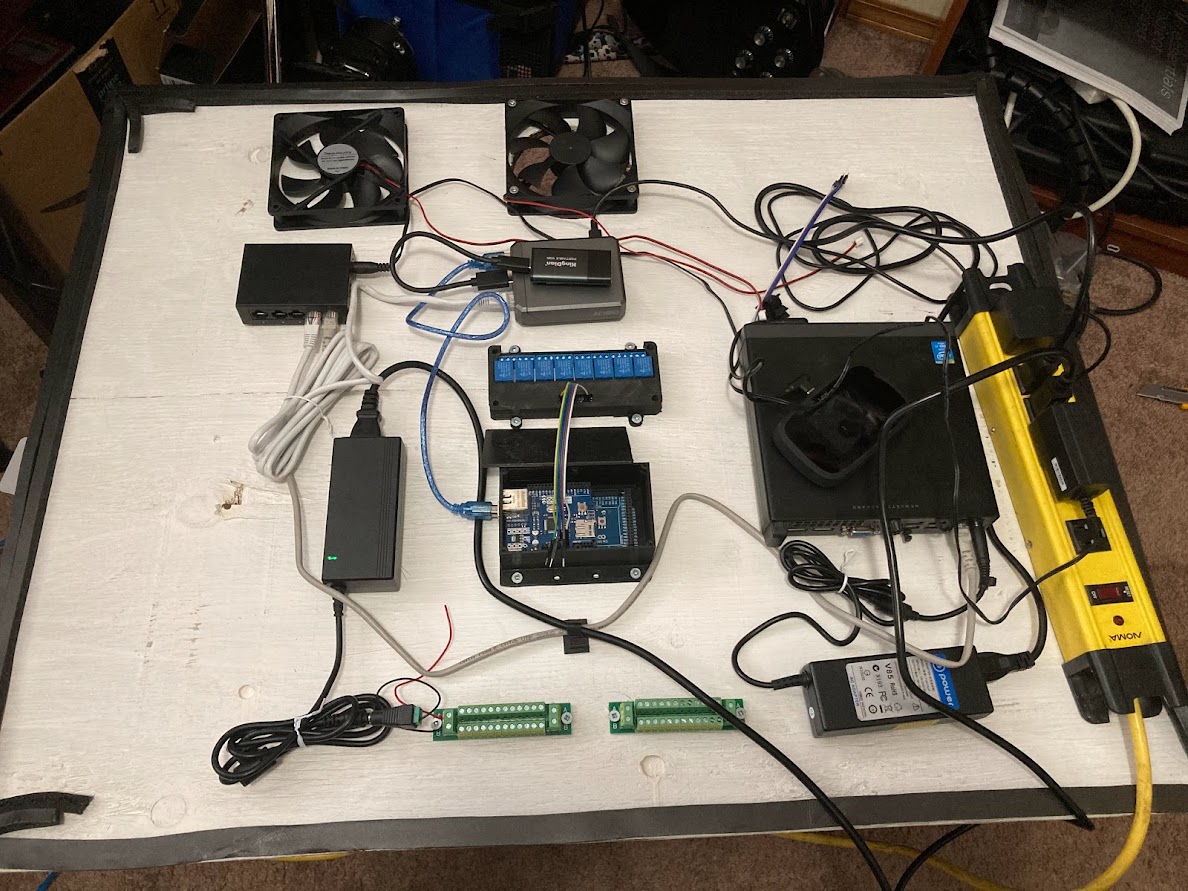 Since it’s raining today and promises to rain for the next 5 days my focus has changed to working on the electronics package to run the Micro-Observatory (MO). I transferred the components of the package to the newly painted door of the MO and started figuring out the layout that makes the most sense. I mounted the fan over the hole cut in the door for pulling hot air out of the electronics bay during hot weather – you can see a second fan that will be mount in the internal bulkhead to push hot air into the instrument bay during cooler weather to see if it helps things stay dry. I suspect I’ll put another fan on the S exterior of the instrument bay to exhaust hot air and moisture out of the bay. Each 12v fan will be connected to a relay so I can turn it on and off.

I’ll also have my ZWO ASI224MC camera in my allskycam attached to the RPi via USB3 with the INDI Allsky software installed. One of the relays on the board will control the dew heater in the dome of the camera (which frankly I’ve never had to turn on but it’s there!) The current RPI 3B+ that runs the camera will be freed up for other projects.

Once I get some nicer weather I’ll finish sealing up the MO instrument bay, assemble and test the telescope, and get the electronics package mounted on the shed and sealed up – there’s weather stripping around the door that will scrunch up when the door is screwed to the frame. It’ll also have a cover to keep most of the rain off, and that will probably be augmented with duct tape to make sure it’s protected from moisture. I lot of bother but I’d rather not have to crawl into the instrument bay all the time and disturb the telescope!

The Ubuntu computer is a development box but will also allow me to run KStars/EKOS and SIRIL, the free image processing tool. I wanted to experiment with auto-calibrating each image as soon as it comes off the sensor which can be done directly from the EKOS imager sequence (which can run a script after each download) or as a postprocess in the EKOS scheduler, but SIRIL doesn’t currently compile on the Raspberry Pi plus it needs to hefty processing power. So, if I run KStars/EKOS on the PC talking to the INDI server on the telescope RPi the images will be downloaded to the PC and can be processed right there. At the end of the imaging sequence the script would stack the image and send it to my web site. Obviously not a final image but it would be neat to have the scope post the interim image to let followers know what it was doing last night!

Missing is a breadboard where I’ll mount the circuit to run the electroluminescent panel I use for flats, and some temp/humidity sensors.